Opened on April 3, the center features a variety of programs for the entire community.

Jewish Family and Children’s Service of Greater Philadelphia opened the Barbara and Harvey Brodsky Enrichment Center in Bala Cynwyd on April 3. The opening of the center comes in a time of adversity for the Jewish community in America, with anti-semitic acts reported nationwide, including along the Main Line. 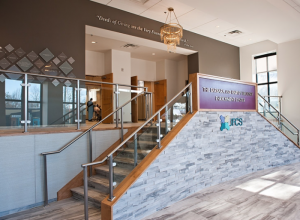 Lower Merion is one of the fastest growing Jewish communities in America, leading JFCS to open the Bala Cynwyd location, making it their fifth overall location. Barbara and Harvey Brodsky, whom the center is named for, were both active members and donors to the JFCS community. Though Harvey is deceased, Barbara continues her involvement and had a vision of creating a place where individuals could go, somewhere that was like an extension of their own home.

It’s all the more important when certain communities and religions are facing troubled times. Just this past February, students and faculty at Perelman Jewish School in Wynnewood rushed to evacuate the building after a bomb threat was phoned in. Many Jewish community centers across the country faced similar threats, including a Jewish cemetery in Northeast Philadelphia, which was defiled and suffered damages to tombstones. For residents of Bala Cynwyd and neighboring towns, the new JFCS Enrichment Center will serve as a beacon of light.

The center provides supportive group programs, life skills and community building programs. Volunteers are invited into the building to work with the participants of these programs and help bridge the gap for isolated members of the community who struggle with a life challenge or circumstance. 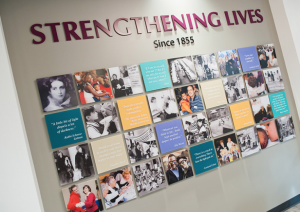 “It’s a way of not only of building life skills, independence, socialization, and support, but it’s a way of connecting people as well,” says Paula Goldstein, CEO of JFCS. The facility will also feature a teaching kitchen designed to help individuals with intellectual disabilities learn to cook, a creative arts studio, a parenting resource center, a children’s den, a financial empowerment center, and a “senior oasis.”

“We are hoping to celebrate the talent of many of the people that we serve through art and music,” Goldstein says. “I hope that the community will know that we at JFCS are here for them. We’re all on the continuum of life, we all experience challenges and crises—there’s no way of escaping it, but this building belongs to the community.”