JFCS Fertility Fund a Godsend for Some Couples 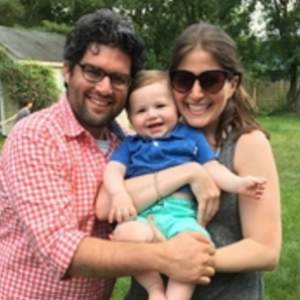 Forget what the calendar says: Every day is Mother’s Day for Lisa Feingold.

And every day is Father’s Day for her husband, Ron.

After all, when you spend more than a year of agony and frustration trying to conceive a child and almost reach the point where you’re ready to accept it just won’t happen — and then it does — there’s no such thing as a bad day.

That’s because of Lev Elan Feingold, a child “wanted more than he’ll ever know,” according to his mother.

To make it possible, she had to overcome an array of not only physical challenges but emotional ones.

And now she wants to share their story so that others in the same predicament won’t feel so alone.

She also wants people to know that the Jewish Family and Children’s Service of Greater Philadelphia (JFCS) Fertility Fund is available to lift some of the considerable financial burden off their shoulders.

In their case, it was to defray some of the costs of in vitro fertilization (IVF), which the Feingolds believe is why Lev is here today.

“I know it sounds cliché, but I feel so lucky to be a mom every day,” said Lisa, who is looking forward to celebrating Lev’s first birthday, July 15, on the beach at Longport with her family. “It changes motherhood when you go through a time when you think you’re not going to be able to be a mom.

“Every day I wake up with Lev I feel grateful. Beyond that, our son is a happy kid. We’ve just enjoyed parenting, and even on the tough days we feel lucky.”

Their story is a testament to faith, perseverance and — as she’s the first to admit — just dumb luck.

Lisa and Ron first met at Camp Ramah in 1994 and stayed friends through the years while both attended what was then Akiba Hebrew Academy. Then he went off to Penn State and she went to Binghamton University – State University of New York, before they reconnected years later.

Eventually they started dating, got engaged and married — on New Year’s Eve 2012.

Shortly afterward, they decided to start trying to raise a family, only to run into unexpected difficulties. Following a few months of trying, seeing doctors to try to figure out what was wrong and going through tests, they learned the truth.

Lisa was suffering from endometriosis, a painful condition in which tissue that normally grows inside the lining of the uterus grows outside and can impact various aspects of a woman’s life, including pregnancy.

It was a stark realization which was further compounded because they didn’t know where to turn.

“There’s a lot of challenges with infertility,” said Lisa, a Center City dental hygienist, who grew up in Cherry Hill, where she attended Congregation Beth El. “The emotional part is certainly a big one. Just as a woman when you want to start a family I felt bad I couldn’t do it. I had wanted to be a mom my whole life.

“I’m the youngest of four. One of my sisters has four kids. One has three kids. My mom had four kids. We had no history of fertility problems in my family, so I was not expecting at all to have any issues.

“Throughout this process, I’ve become very open with it. I’ll talk about something that doesn’t get talked about, which is a shame, because it’s something you need so much support on because you’re going through so much.”

Once they began to open up about their “secret,” Ron and Lisa got immediate support from their families. Around the same time, they received encouraging news from the second fertility specialist she began seeing in Cherry Hill, who informed them that IVF was viable.

By that point, the bills had begun to mount. Infertility is seldom covered by health insurance or, at best, it will pick up a portion of the costs.

That kind of stress makes what’s already a difficult situation worse, especially when a couple has to make hard choices about how much they can spend.

“Financially, it’s very taxing,” said Ron, an environmental consultant from Elkins Park and Congregation Adath Jeshurun. “Until we even got to the specialists, we had a spent thousands of dollars going to doctors and on different trials and medications.

“IVF itself just for a treatment and the doctor is $10,000 minimum. We were just turning 30, just getting into our careers. So to think about spending an additional $10,000 is not an easy decision. But we would’ve done something or paid any price to have a child.”

Thanks to the Fertility Fund at Jewish Family and Children’s Service of Greater Philadelphia, they didn’t have to do so.

Created in 2012 by Ira and Eva Greenberg, a Center City couple who — similar to the Feingolds — were able to have children through IVF, it was their way of giving back.

“Part of what makes our children’s presence in our lives so extraordinarily special is the long journey we faced in realizing our dreams,” Ira Greenberg told the Jewish Exponent in 2014. “We have a strong urge to help others in the Jewish community going through IVF.”

Like the Feingolds, who were told about the fund through a friend, they were not only accepted but taken in almost as if being part of the family.

“She interviewed us right away to get to know us. You could tell right away she was on our team. This fund is pretty amazing. I don’t think there’s anything else like it in the Jewish community.

“They wanted to help. For us, telling people about JFCS and this fund, which has given so much to us, it’s the least we can do. It helps grow Jewish families. It strengthened our family in ways I can’t begin to express. The amount of stress it took off our shoulders was such a gift.”

Even with the financial burden eased, they were, in many ways, just getting started.

First, Lisa had to get pregnant through IVF, which requires having eggs retrieved from her ovary, which are fertilized outside the womb, then implanted back a few days later.

She was able to produce five eggs. Of that number, only two made it through the process, meaning there was no chance to freeze the rest for a future pregnancy. Even then, they lost one of what would’ve been twins after 17 weeks.

Still, nine months after the Oct. 19 implant, following a pregnancy where Lisa did basically nothing but work, come home and rest in bed, Lev came into the world at Pennsylvania Hospital — a week late, in fact.

“Lisa was born to be a mother, but we’re really lucky it took the first time,” Ron said. “Some people have to do more than one round — if it even works. While we did have a limited amount of eggs, now we have a son and feel very fortunate and grateful.

“It’s easy for us to look back now because we have a child and people who go through this may not be as fortunate. But you’re not alone on this journey, and it’s not as uncommon as you may believe.”

Their happy ending even now still seems beyond belief.

“Lev is our miracle. We feel so grateful, and we want to give back to other people who are going through it. I’m so excited for his first birthday. I still say to Ronnie, ‘I can’t believe he’s here.’ ”

Today, tomorrow and every day.